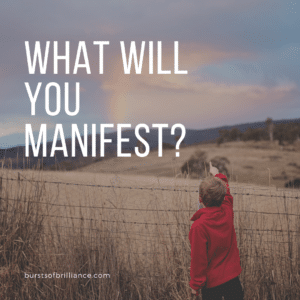 My daughter is a master manifester. As so often happens with offspring, you teach them a skill and they surpass you at it. My daughter has learned a few things in her manifestation journey, though. For one, she’s learned the universe has a sense of humor. She once manifested: “Megan will be in my class.” When she arrived in class, she scanned the room for her friend, and was disappointed not to see her. Then a stranger sat down beside her and said, “Hi, I’m Megan.” My daughter and I have often joked that she needs to be more specific with the universe.

Then again, my daughter has learned that being too specific, too rigid, in your manifestations also may not work. She has occasionally tried to manifest a very certain type of job, only to see it fail to materialize. I suggested maybe the universe could see that she needed to broaden her view of the “perfect job” and what she really needed to learn.

She and I are both discovering that when our manifestations work best is when we can uncover the desire (and that desire feels like it comes from Higher Self) and then focus on that desire without focusing on how it will manifest. That’s not to say we don’t have a part in making it happen, but first we must let go of trying to control the outcome. I’ve certainly had the experience many times in my life, even in some very big ways, where I felt absolutely sure of something I was supposed to do and had no idea how I’d assemble the money, skills, or people to do it. But I kept the faith, I didn’t overthink it, I kept advancing toward the goal, and those resources came.

More often, though, my mind has been unwilling or unable to release the need to direct how and when I achieve the desired result. So often, I can’t seem to let go of worry, insecurity, fear, and pressure, and it feels as if the universe is saying, “I’m waiting. As soon as you shed all that doubt, I’ll know I have your permission to move forward.” Why, when I know it works to do just that, do I have such a hard time letting go?

I think when I first learned about manifesting, I confused it with the type of prayer I’d grown up practicing. The problem with those prayers for me was that asking for something I wanted always seemed to hinge on whether I was worthy of receiving it or whether the desire itself was worthy. My daughter doesn’t seem to question whether she’s worthy. She knows she is. And that’s where she’s got me beat. That is where she can teach me. And if I can learn that lesson well, maybe I can let go.