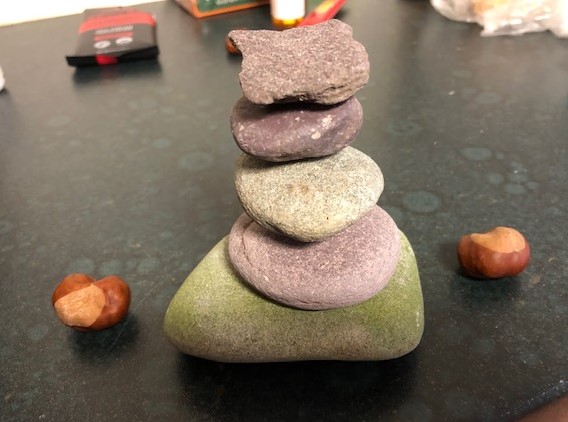 As I mentioned last week, I broke my collarbone while vacationing in my beloved Ireland. In describing the accident and how it affected the trip, I’m tempted to call it a bit of a setback, but that doesn’t feel like the right word. Oddly enough, it was a step forward, not a setback.

I won’t lie, it definitely hurt. A trip to the emergency room is always scary, and maybe a bit more so in a foreign country. A sling takes some getting used to, and learning to do things one-handed was a challenge. As I mentioned, the pain slowed us way down, but it also made me more aware of my own body. How it moves when I walk or sleep or breathe deeply. But also, how it moves in crowded spaces or even how often my husband and my bodies move closely around each other as we prepare dinner, put away groceries, share a bathroom sink.

Because I’d been told by the doctor that the only thing that would significantly impact my healing was another hard fall, I started watching my feet. Carefully. Everywhere we went. I noticed every crack in the sidewalk, judged the height of steps, reached out more often for handrails or sturdy branches for balance, and leaned into the walking stick we bought along the way.

In doing so, I noticed something interesting . . . the rocks in Ireland come in lots of colors: green, pink, purple, black with white stripes, silver with sparkles, bright white. I’ve always liked rocks. When I was a kid, I had a rock collection. I kept it in a gallon-size container under my bed. Every now and then, I’d get them out and line them up to admire them. And now here I was forty-five years later collecting rocks again. I’d point them out to my husband with my walking stick, and he’d pick them up, brush them off, and semi-grudgingly put them in his pockets. We found some of them on nature trails, one on a beach, and a couple near our cottage.

I was picky about the colors and shapes, so sometimes my husband would have to swap one for another. At first, he thought I was crazy, then he started to embrace the hunt. Sometimes he wasn’t sure why I’d discard one that seemed perfectly fine to him. “Rocks are soulful creatures,” I told him. “Especially Irish rocks. It has to feel right.” I’m pretty sure he still thinks I’m a little nuts.

Sometimes on the nature trails, he’d let me walk in front of him so I could set the pace. “Don’t step on the caterpillar,” I’d say, or, “What kind of leaf is that?”  Sometimes I’d point out tiny flowers growing in the grass. Once, a lady called us over to see a baby field mouse.

Often, we’d stop for a rest, and my gaze would travel upward, across rolling hills of emerald green, or gentle waves rolling in from the horizon, or moss-covered trees sheltering fairy houses. I treasure those rests. And I treasure the rocks we packed home in our suitcase. There’s so much joy right at our feet, if we just learn to watch our steps.