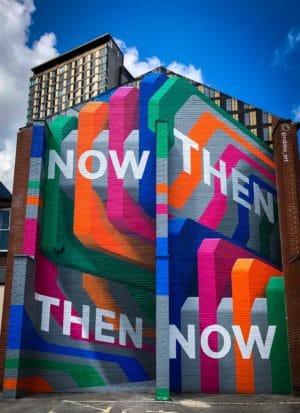 I’ve been reading The Power of Now: A Guide to Spiritual Enlightenment by Eckhart Tolle. I’m only about halfway through the book, but so far, his main point seems to be, stay in the moment. Stress comes from projecting our fears and worries into the future or revisiting our regrets about the past. If you stay in the now, you’re free. At least that’s how I’m taking it.

The first thing I noticed about the book is that the author repeats himself a lot. How many ways can you say “stay in the now”?  But then I realized he had to repeat. I had to read his message several times before it even started to sink into my thick skull. It’s such a simple concept, which is what makes it so hard.

Tolle also talks about how there are no “problems” only “situations.” We create problems with our minds by stewing about something that may or may not happen in the future or kicking ourselves for something we did in the past. He argues if you just stay in the now, you can ride through any circumstance. If something does arise that requires your attention, you take care of it. It becomes a situation that needs addressing, not a problem.

And because we are simple beings, I needed a simple example from my own life before his words could truly take hold. Here’s what happened: our daughter recently moved out of state, and we sent her a package of bedding timed to arrive when her new bed arrived. But my husband forgot to put the apartment number on the package. We both became upset. He kicked himself for missing that detail, and I kicked myself for not checking the address before he sent it. I worried that the package would get lost and never arrive, that the delivery person would just leave it in the lobby of the apartment building and someone would steal it, that the package would get returned and we’d have to pay the high postage again. But then I stopped myself. I stayed in the now and waited to see what would happen. On the day it was to be delivered, UPS called and said they needed an apartment number. We provided it. The package was delivered the next day. Situation addressed. There was no problem to solve. And even if things hadn’t resolved so easily, there were other ways to fix the situation.

Lately, with all the changes in my life and business, I find my thoughts wandering down troubling paths at times. Whenever a worry, doubt, or insecurity arises, I simply say “stop,” and I stop the thought in its tracks. Or I borrow a word from Dr. Joe Dispenza and say “change.”  Let’s say the thought is, “What if my new book doesn’t sell as well as I hope it will?” I change the thought instantly to, “Bursts of Brilliance will sell better than I ever hoped it could.” This kind of thinking helps keep me in the now because it takes away fear and insecurity.

That’s not to say we don’t have to sometimes think about the future in order to plan, or revisit the past in order to learn, but living in the now as much as possible sure does help keep stress at bay.

I’m still reading the book and I know I’m oversimplifying his message, but this thinking is working for me, so I’ll take it. I also hope Tolle will keep repeating himself. It may take several reminders and lots of encouragement for me to unwind a lifetime of being led by my mind and my worries and learn to be truly present.